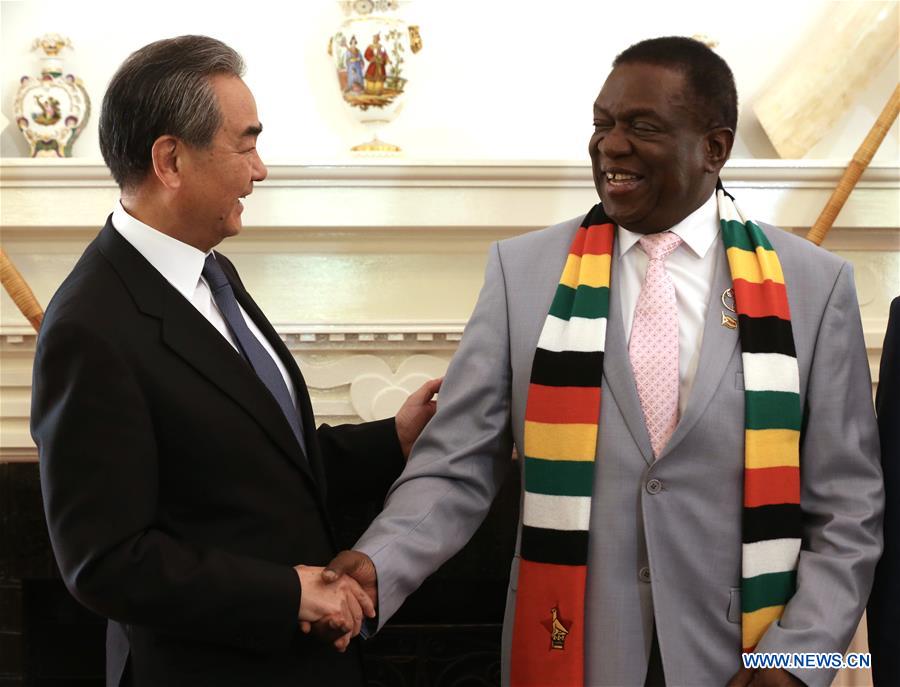 Mnangagwa said Zimbabwe and China enjoy profound friendship and that Zimbabwe regards China as a sincere and reliable friend. The Zimbabwean leader said that he has met with Chinese President Xi Jinping many times and the two heads of state decided to elevate bilateral relations to a comprehensive strategic partnership, an elevation that Zimbabwe is pleased with and proud of.

In the process of striving for national independence, safeguarding national sovereignty and opposing Western interference and sanctions, China has always extended firm support to Zimbabwe, which the southern-African country will never forget, Mnangagwa said.

He said that Harare appreciates China's selfless assistance to Zimbabwe's economic and social development, and hopes that China will continue to help Zimbabwe speed up its economic reform and realize economic recovery.

Zimbabwe hopes to take the opportunity of celebrating the 40th anniversary of the establishment of diplomatic relations between two countries to deepen political mutual trust and enhance the level of pragmatic cooperation between Zimbabwe and China. Harare expects more Chinese investors to invest in Zimbabwe, and believes that Zimbabwe will have broader development prospects, Mnangagwa said.

Wang, for his part, said Beijing is Zimbabwe's time-honored and reliable partner and that President Mnangagwa cherishes the friendship with China, adding that China highly appreciates Mnangagwa's personal attention to supporting Zimbabwe-China cooperation that has kept advancing the bilateral relationship to new highs.

Wang said China is willing to see Zimbabwe develop friendly and cooperative relations and expand diplomatic exchanges with more countries; Beijing appreciates Zimbabwe's valuable support on issues related to China's core interests, and will provide assistance to Zimbabwe within its capabilities and share the country's experience in governance.

This year, Wang said, both countries are at a crucial point in their state development and national rejuvenation: while China will meet its target of building a moderately prosperous society in an all-round way and accomplish its first Centenary Goal, Zimbabwe will celebrate the 40th anniversary of its independence and vigorously advance its Vision 2030 blueprint.

He also called for closer coordination between the two sides on international and regional issues to deal with challenges more effectively.