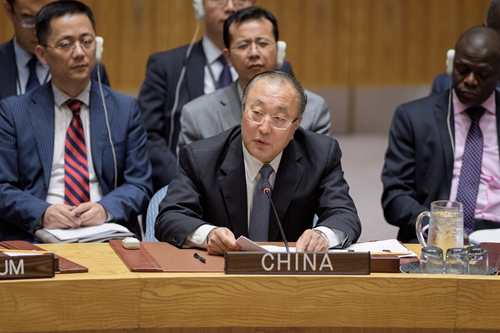 China, which will preside over the United Nations Security Council for March, will make efforts to strengthen solidarity and cooperation with all parties to ensure that the council fulfills its responsibility and plays a constructive role in maintaining international peace and security.

Ambassador Zhang Jun, China's permanent representative to the UN, said Monday at UN headquarters in New York that during its presidency, China will be responsive to the expectations of the international community and contribute more to world peace and development.

Zhang said that China will give priority to strengthening multilateralism and upholding international cooperation.

Zhang said that unilateralism is currently having a strong impact on the international order, the rule of law and the status of the UN.

At the time of the 75th anniversary of the organization, Zhang said that the world — more than ever before — needs multilateralism, a stronger UN and Security Council, and solidarity among member states.

On March 19, China will convene an open debate titled "Maintenance of International Peace and Security: Upholding Multilateralism and Promoting the Political Settlement of Disputes".

China also will put the month's focus on supporting Africa in promoting peace and development.

The Security Council will convene a March 11 debate titled "Peace and Security in Africa: Countering Terrorism and Extremism in Africa".

As a major troop-contributing country and the second-largest financial contributor, China will host a debate March 24 with the title "United Nations Peacekeeping Operations: Better Capacity Building, More Safety and Security".

Zhang said China will make its efforts in promoting regional political settlements and maintaining international fairness and justice. Zhang said the council will play its usual role on discussing hot spots such as Syria, Libya, Palestine, South Sudan and Yemen this month.

Responding to questions from correspondents about the coronavirus, Zhang said that China's fight against the outbreak has made good progress, and the situation is getting better.

Facing the severe challenge posed by the viral outbreak, Zhang said China has taken "unprecedented efforts and the most comprehensive, strict and thorough" prevention and control measures.

"I'm sure the whole world has witnessed the strong determination of the Chinese government and the power of a united Chinese nation and the strength of China's system," he said.

Zhang said the forward momentum is growing in the work of prevention and control. The number of new cases is declining. Medical research has achieved encouraging initial results.

"COVID-19 is a common challenge facing all of humanity. China is fighting not just for itself, but also for the world," he said, adding that China treats its own people and those of other countries in the same way and applies prevention and control measures equally.

China is providing assistance with relevant countries and international organizations, contributing to the joint response to the outbreak.

While battling the disease, China is also taking care of its economic and social development.

Zhang said that as the world's second-largest economy, China is keenly aware of its responsibilities. Currently, China is taking "a series of strong measures, including policy support in fiscal, financial, taxation and industrial fields to facilitate the restoration of work and production and to boost the economy".

With the strong resilience of China's economy, broad domestic markets and sound industrial foundation, the positive trend of the Chinese economy remains unchanged, reported the ambassador.

"There is every reason to be confident in the future of China's economy," Zhang said.

Responding to a question about the US cutting the number of Chinese journalists in the US from 160 to 100, Zhang said: "This is a country (that) advocates freedom of expression and is a country which is supposed to give full support to the work of correspondents.

"Yes, indeed, between China and the United States, we have some differences," he said. "But we do not think it's appropriate to the US to take steps in interfering with the work of journalists coming from China."