How the BRI is creating new-age entrepreneurs 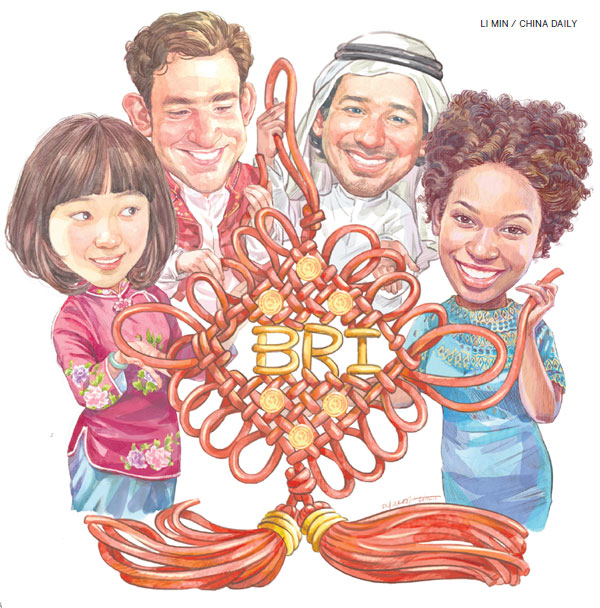 We are in the midst of the third wave of globalization that focuses on technology creation, trade, and cooperation among developing countries, especially in Eurasia and Africa.

New transport infrastructure, partly financed through the Belt and Road Initiative and the Asian Infrastructure Investment Bank, provides the hardware of this globalization. But, people-to-people links are the crucial software.

The first post-WWII globalization wave, 1945-1975, boosted trade and growth among Western developed countries. Developing countries were mostly suppliers of raw materials to the then industrialized countries.

In the third wave, we are seeing sustainable trade flows between countries in Asia and Africa, leading to fast development with much less dependence on demand from the high-income countries.

April 2019 World Bank research by Maryla Maliszewska and Dominique van der Mensbrugghe estimated that total world GDP will rise more than 0.7 percent by 2030 as a result of increased trade facilitated by the BRI infrastructure.

That may not sound like much, but it's a significant percentage of a huge number, so it amounts to as much as $1 trillion and will contribute to lifting 7.6 million people out of extreme poverty and 32 million from moderate poverty, according to the study.

Half of this GDP gain will likely flow to BRI economies apart from China. In percentage terms, the largest return accrues to Pakistan with an increase of 10.5 percent in overall real income and the Kyrgyz Republic with 10.4 percent.

East Asian economies will also see sizable gains: Thailand (8.2%), Malaysia (7.7%), Cambodia (5%) and Laos (3.1%). About 20 percent of the gain flows to China, which is estimated to see a GDP increase of 0.7 percent. Other big beneficiaries are East African countries (Tanzania, Ethiopia, and Kenya) and Eastern Europe, especially Poland.

The new trade made possible by the BRI infrastructure is creating a new generation of entrepreneurs.

At the Bishkek summit on June 13-14, the heads of state of the member countries of the Shanghai Cooperation Organization called for "the development of technology parks and business incubators in the SCO region for the purpose of improving the regional business climate and supporting youth startup projects, including the International Youth Business Incubator of SCO countries within the framework of the SCO Youth Council."

I've had the opportunity to meet with lots of young foreigners, mostly students at universities in Beijing, who are working to build new companies in China or that connect their home countries to the Chinese economy. It's exhilarating to see the dynamism of these young entrepreneurs.

I accompanied the students on a "walk around Haidian", Beijing's high-tech region, organized by the Zhongguancun Belt and Road Industrial Promotion Association and also met with entrepreneurs through the Global Foundation for Youth Entrepreneurship, which is affiliated with the University of International Business and Economics in Beijing. I also attended a Model SCO, in which young people simulated a meeting of the SCO.

Many young people are building their lives around these new business opportunities.

For example, Svitlana Kutia, an MBA-student from Ukraine, has set up a company called Tech Pool CEE that connects tech companies in Central and Eastern Europe to Chinese tech companies. "Five or seven years ago we heard about Chinese copycats, but currently they are completely different. They have unique projects, unique devices, and actually unique companies. That are going global and succeeding so fast. Foreigners have to pay attention to this and think about how we can succeed in China," she said in an interview with China Daily. She notes that the business climate is safer than in her home country: "I believe the policies here are working better and because of this we can do our business."

Abdul Hadi Hanan, from Pakistan, who is working on a master's degree in electrical engineering at Beijing Jiaotong University, said that the BRI is very good for countries that are still developing. For example, in Pakistan, China is investing in energy and infrastructure and is building a road, the China-Pakistan Economic Corridor, linking the two countries. "China is investing a lot on the education side and the infrastructure side and, after some time, there will be a lot of opportunities and jobs for the people. I think it is a great initiative. So, trade becomes easy."

An MBA student from Mexico, who preferred not to be named, said: "I think what Zhongguancun and the Haidian government are doing is just amazing. They use facilities that they already have to build incubators and to link students who have entrepreneurial aspirations. It is not just money. They provide mentorship facilities and help meet regulations. This should be replicated not only in other cities in China, but also in our own countries."

And, Saman Pouyanmehr, from Iran, founder and CEO of the GFYE and a recent graduate of the UIBE with a major in finance, said: "China is a unique country that offers unique opportunities and values to entrepreneurs for realizing their goals. I'm very happy that I'm in China at the same time that the Belt and Road Initiative is growing. China soon will be an influential country in the digital economy era through integration of Chinese and foreign talents, and also by introducing world-class startups. The biggest opportunities for entrepreneurs are here."

Olim Alimov, from Tajikistan, who is the head of the Beijing office of the United Center for Business Cooperation under the SCO Business Council Secretariat and who also runs a consulting company and imports Russian caviar into China, said: "The Chinese government understands that small and medium-sized businesses are driving the economy now. They understand that they need to boost entrepreneurship to bring innovation. They do everything in order to make it happen for all the entrepreneurs and startups.

"We feel this support for international entrepreneurs in government policies. For example, in the last year, the tariffs and the taxes for many of the product lists, including the caviar, have dropped significantly. We pay now 40 percent less to bring in caviar than we did two years ago.

"There is a lot of government support toward building entrepreneurship parks. For example, right here in Zhongguancun, Innoway (an information exchange platform set up by the Beijing and Haidian governments) hosts many international companies. It is basically a one-stop shop. It is one window toward all the resources you can get for a startup. That is a huge, huge boost."

However, there is still a long way to go to create a system of easy trade and cross-border entrepreneurship in Eurasia. Delegates to the Model SCO identified visa issues as a major barrier to young entrepreneurs. The Pakistani delegation proposed that an "SCOyouth card" be established to allow young students and entrepreneurs to travel and work throughout the region.

The Russian delegation to the SCO said that a key obstacle to entrepreneurship across the region is "lack of easy information and harmonization between national bureaucracies."

Other delegates said that key barriers include protectionism and competition from established monopolies.