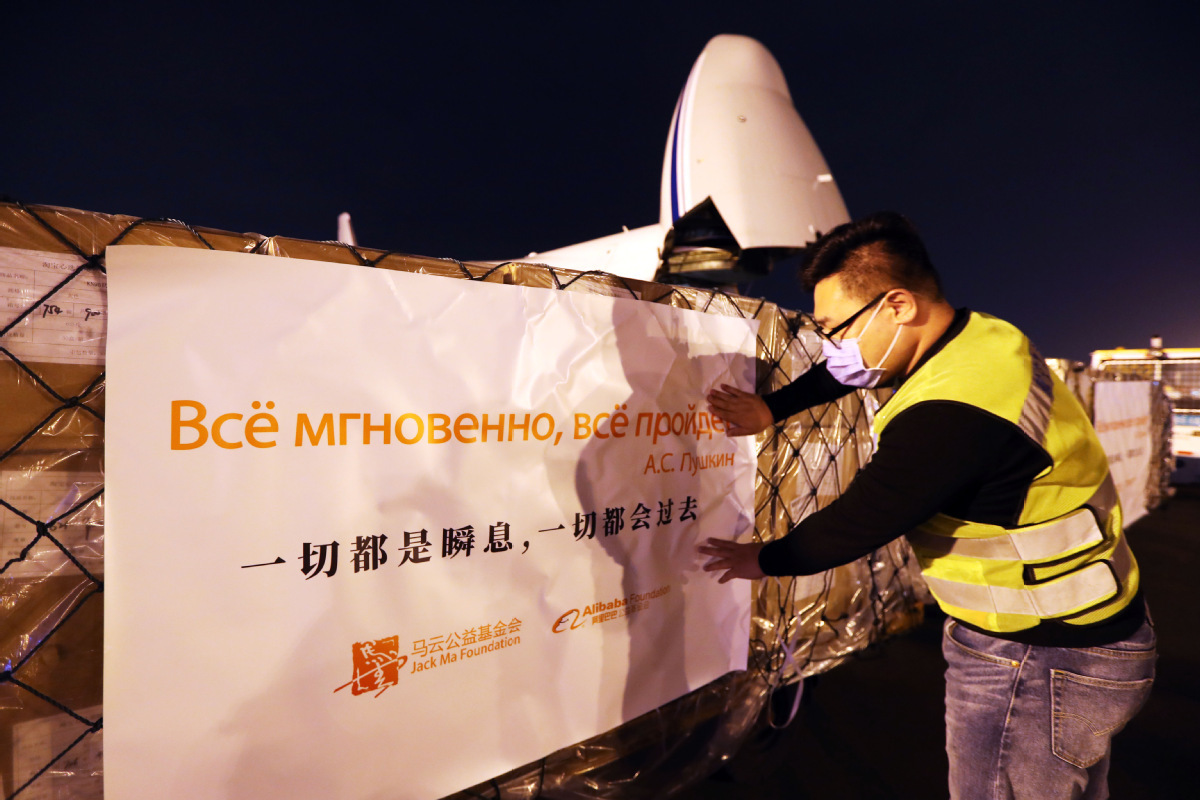 A large transport plane that landed on Tuesday in Hangzhou, Zhejiang province, will carry donated materials back to Russia to help in the fight against the coronavirus. [Photos provided to chinadaily.com.cn]

The unprecedented challenge the world is facing today because of the novel coronavirus pandemic will, hopefully, also make all countries realize that our common destiny is to stand by each other's side to overcome common challenges. That many countries have realized this fact was evident on March 26 when the first ever Extraordinary G20 Leaders' Summit was held via video conferencing.

It remains to be seen, though, whether all the countries will put into practice the decisions taken at the G20 meeting. After all, the commitment to not impose protectionist measures made by the G20 Summit to overcome the 2008-09 global financial crisis was soon broken by some countries. But we hope for the best, because the pandemic is a question of life and death, and much more important than countries' or leaders' egos.

Many countries' response to the threat was slow

The flow of people, thanks mainly to economic globalization, helped spread the virus around the globe at such a fast pace. Yet many countries were either slow in taking measures to contain the outbreak or were handicapped by their relative weak healthcare system to appropriately respond to the health crisis.

While China, the Republic of Korea and Japan have largely contained the spread of the virus at home, there are still debates on the best way to avoid an "Italy like" scenario－which range from complete lockdowns, as announced by the Indian government in a country with a population of 1.3 billion, to just asking people to practice social distancing.

Russia swung into action rather early as it realized the threat the novel coronavirus posed to public health. Although it could not prevent an outbreak in the country, it managed to slow the spread of the virus and delay the peak by two-three weeks. This, government officials say, allowed additional healthcare resources to be mobilized to prepare for the worst-case scenario.

Russia restricted, if not completely banned, travel initially from China, and then from the ROK following the implosion of cases there. The restrictions were later extended to travelers from Italy and some other European countries. And on March 18, Russia imposed a complete ban on foreign arrivals, followed by a ban on all international flights a couple of days later till May 1.

As of Wednesday, Russia had more than 2,300 confirmed cases, many of them imported cases or those who had come in contact with them.

Keeping in mind the importance of continuing education, the Russian authorities recently decided to shift school and college classes online. And universities such as the Far Eastern Federal University are among those best equipped to introduce online teaching and prepare the students for the future.

Similar measures to keep all employees, if possible, or arrange for some of them to stay at home have also been introduced.

In fact, Russian President Vladimir Putin addressed the nation recently to announce that all workers, except those employed in emergency services, certain government offices, banks, pharmacies and groceries, will be officially off work from March 28 to April 5.

But while trying to protect its citizens against the virus, Russia continues to intensify cooperation with other countries to contain the pandemic.

For example, the Russian Federal Service for Surveillance on Consumer Rights Protection and Human Well-being has been more closely cooperating with its Chinese counterpart and the World Health Organization since Dec 31.

And after Chinese scientists' research yielded more information about the novel coronavirus genome, they passed them on to their Russian counterparts for further research.

Today, at least six versions of a vaccine are being tested in Russia, raising hopes that an antidote to the novel coronavirus could be ready by the end of this year. In addition to the official-level cooperation between Russia and China, a number of renowned Russian researchers have expressed their willingness to work with other countries for global common good, among whom is Mikhail Schelkanov, renowned epidemiologist and a professor at the Far Eastern Federal University who is known for his contribution to the fight against Ebola in Africa.

True, the expected economic downturn will influence Russia-China relations, but that can be attributed mainly to the impact of the pandemic on the global economy, with sectors such as tourism and transport being the worst hit, with industrial production slowing down and demand for oil and gas falling drastically. But a lull in economic exchanges by no means can influence political and humanitarian factors.

Politically, Russia stands shoulder to shoulder with China, supporting it against the groundless accusations of US politicians. Russians, in fact, are grateful to China for sending medical supplies to Russia, and hope that once the pandemic is contained and the movement of people returns to normal both domestically and internationally, the projects on hold will resume with greater vigor.

Moscow, Beijing have a lot to offer each other and the world

More important, Russia and China should form the core of advanced international cooperation and solidarity within the United Nations and the G20. They are already advancing initiatives in BRICS, including those on global public health governance. In fact, in mid-February the BRICS Sherpa meeting issued a statement saying that the world should unite to fight the coronavirus outbreak.

In other words, Russia and China have a lot in common, and a lot to offer to boost each other's sustainable development and their peoples' well-being. What doesn't kill us makes us stronger－which also applies to Russia-China ties, and we hope to emerge stronger from the pandemic thanks to the strength of our friendship.

The author is vice-president for international relations of the Far Eastern Federal University, and scientific supervisor of the BRICS Expert Council, Russia. The views don't necessarily reflect those of China Daily.