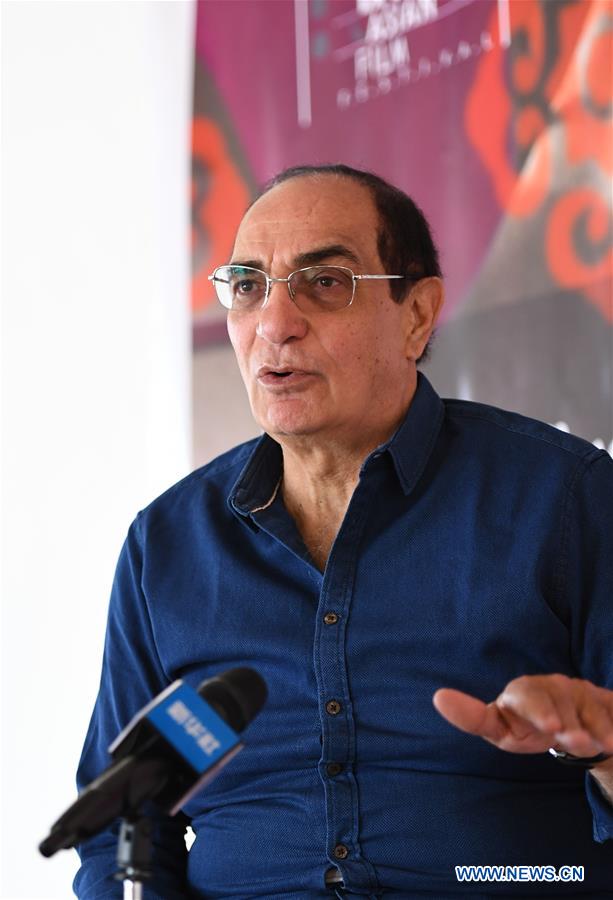 President of Sharm el-Sheikh Asian Film Festival (SAFF), Magdi Ahmed Ali, speaks during an interview in Sharm el-Sheikh, Egypt, on March 6, 2019. Magdi Ahmed Ali praised on Wednesday the participation of China as a guest of honor in the festival with a special variety of movies. (Xinhua/Wu Huiwo)

SHARM EL-SHEIKH, Egypt, March 6 (Xinhua) -- President of Sharm el-Sheikh Asian Film Festival (SAFF), Magdi Ahmed Ali, praised on Wednesday the participation of China as a guest of honor in the festival with a special variety of movies.

"I feel proud to head a festival that chooses China as an honor guest. The Chinese filmmaking is unique and is characterized by cultural and visual richness," Ali told Xinhua in an exclusive interview.

The SAFF in its third edition has kicked off last Saturday and will end on March 8 at the Conferences Center of the coastal Red Sea city with the participation of 58 movies from 26 Asian countries.

The movies will be competing for nine awards in five competitions, with three Egyptian films to have their world premiere.

"This is the third edition of the festival, but the first as an Asian version," Ali said, noting the relation with Asian cinema is limited and the organizer decided this year to designate the festival for Asian movies.

"When we thought about the guest of honor, China as the largest Asian country came as the first choice. China has a great deep-rooted civilization, and owns an international accelerating cinema power," the SAFF president said.

Ali, a 66-year-old prominent Egyptian movie director, said "the Chinese filmmaking is relatively satisfactory but the number of movies should be increased."

He described the Chinese cinema as spectacular because it is utterly purified of any western influence. Its movies are obviously expressing the Chinese people with commercial potentials in the same time, which is rare in other countries.

Ali deemed the Chinese civilization as "the purist one in the world" because it was not penetrated during thousands of years by other cultures.

He pointed out that Chinese movie has reached the level of super international movies and gained prizes in important festivals of Berlin, Cannes and Venice.

"The Chinese cinematography has strong producers, huge budget and thousands of screens. It is a promising film industry that will bring its fruits in near future," Ali said.

Meanwhile, the Egyptian director listed shortage of funds and insufficient number of displaying houses as main challenges that face the Egyptian cinema.

He called for learning from the Chinese experience that established lately thousands of new cinemas, to attract more viewers, achieve more domestic interests and avoid the foreign revenues that are subject to the external taste.

"The Egyptian cinema will be stronger, like the Chinese and Indian ones, when it achieves gains from its citizens first and then the Arab ones," Ali illustrated.

He added that the topic of terrorism should be tackled more in the Egyptian movies, considering the extremism is more dangerous than poverty as it threatens development.

"Egyptian cinema industry in that regard is still insufficient because of poor support for that kind of movies and fears of the producers to lose money," he said, mentioning culture, music, reading, theater and media are significant tools for fighting terrorism.