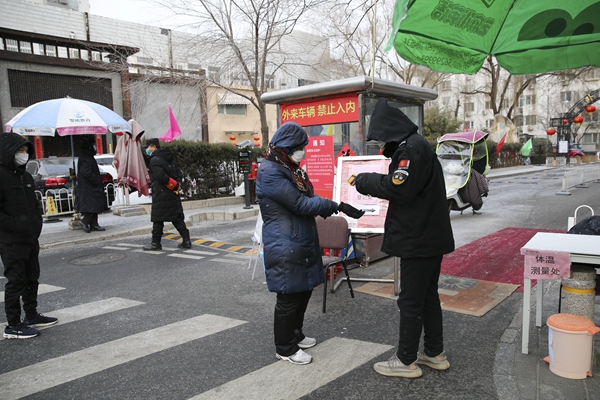 A security guard checks the temperature of a resident at the entrance of a community in Chaoyang district, Beijing, on Feb 5, 2020.[Photo by Kuang Linhua/China Daily]

As a student in international relations at the University of International Business and Economics, I have been in Beijing since Sept 16, last year. When the seriousness of the outbreak of the novel coronavirus became apparent, I admit that I was worried. In addition, my relatives kept advising me to return home. However, after seeing the resolute response of the Chinese government and discipline of the Chinese people in their efforts to resolve this epidemic, I am more sanguine.

The government responded quickly and proactively to the outbreak and called for the public to play their part in the fight. The regular updates about the situation and what to do have been reassuring as they show the government is being proactive.

The Chinese people are also playing their part by acting responsibly. After the initial sense of panic, people have, in general, remained calm and rational. It is encouraging to observe the dedication of all concerned bodies in the fight against this epidemic. People are not allowed to travel to or from Wuhan, the epicenter of the outbreak, which has been effectively quarantined and other places in Hubei province have also been locked down. Monitoring checkpoints have been established across the country.

Wherever you go wearing masks and avoiding people-to-people contacts in public places are mandatory. When I go to supermarket near my home, everybody is wearing a face mask and they are collaborating with the government in the campaign against the virus and doing what they can to help others.

The other remarkable achievement in this battle is the quick construction of the two hospitals (Huoshenshan and Leishenshan) in Wuhan city. It is amazing to think that the construction of each of these huge hospitals was completed within a couple weeks. It shows the commitment and potential of the Chinese government to contain the virus locally and swiftly put an end to the epidemic.

The World Health Organization delegation that visited Wuhan to see the situation at ground zero for themselves praised the efforts of the Chinese government at different levels and the commitment of local health workers and those who had rushed to help from other parts of the country.

Western media, on the other hand, have taken the outbreak as an opportunity to vilify China, the Chinese government and the Chinese people. Instead of acknowledging the government's efforts and the sacrifices being made by the Chinese people, many Western media outlets have been shockingly blinkered and at times openly racist in their reporting. At this critical moment, the international community should be standing shoulder to shoulder with the Chinese government and people of China not only to prevent the emergency becoming a global crisis, but to show solidarity with its people. Such an outbreak could occur in any corner of the world. This is a temporary challenge and I have confidence it can be overcome soon. But at this critical juncture, the international community should be rallying to support China rather than trying to score cheap political points from its sufferings.

Following the United States announcing it was pulling US citizens out of Wuhan, various airline companies around the world decided to halt their flights to China. There is also strong pressure on Ethiopian Airlines (which is the leading airline company in Africa) to stop its flights to its five Chinese destinations. So far however it has resisted the pressure and it continues to fly to Beijing, Guangzhou, Shanghai, Chengdu and Hong Kong. I think this is a good show of support at this critical time.

It is also encouraging to hear recent reports of a growing number of people recovering after being infected with the virus and that the government expects the recovery numbers to increase in the coming days.

My university has paid great attention to knowing and following up the health status of all international students during the holiday. And university staff provide advice on how to stay safe. Considering all these efforts, I feel safe in Beijing.

The author was a social affairs advisor to the mayor of Addis Ababa, Ethiopia. He currently studies at the University of International Business and Economics. The views don't necessarily reflect those of China Daily