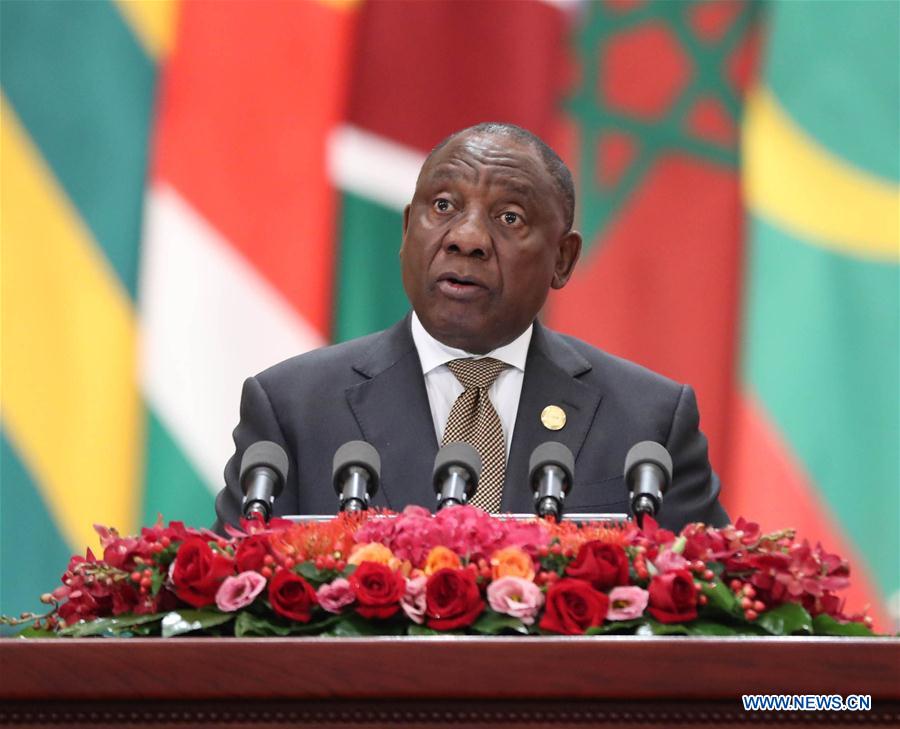 South African President Cyril Ramaphosa addresses the opening ceremony of the Beijing Summit of the Forum on China-Africa Cooperation (FOCAC) at the Great Hall of the People in Beijing, capital of China, Sept. 3, 2018. Ramaphosa co-chaired the event with Chinese President Xi Jinping. (Xinhua/Liu Weibing)

BEIJING, Sept. 3 (Xinhua) -- South African President Cyril Ramaphosa on Monday dismissed allegations of China practicing colonialism in Africa, saying China instead has been a partner in boosting social and economic development on the continent.

Ramaphosa made the remarks in a speech delivered at the opening ceremony of the 2018 Beijing Summit of the Forum on China-Africa Cooperation (FOCAC) at the Great Hall of the People in Beijing.

"Since its launch in the year 2000, FOCAC has grown both in extent and scope," he said. "It serves as an effective platform for South-South cooperation focused on the tangible improvement of the quality of lives of the people of Africa."

"In the values that it promotes, in the manner that it operates, and the impact it has on African countries, FOCAC refutes the view that a new colonialism is taking hold in Africa, as our detractors would have us believe," said the South African president, who is co-chairing the event with Chinese President Xi Jinping.

Ramaphosa, who is on a state visit to China until Wednesday, said FOCAC is concerned with a lot more than trade and investment.

"We are working to build an Africa that is defined by good governance, democracy, respect for human rights, justice and the rule of law," he said, calling China-Africa relations a "dynamic force in the international arena."

He hailed China's Belt and Road Initiative as complementing the forum's goals and Africa's own development plans over the next several decades, saying the grand global initiative will boost trade in Africa.

Lauding China's economic achievements, Ramaphosa said China and Africa are working together to "advance growth and development on the African continent."

"There are many valuable lessons that Africa can learn from China's impressive growth model and its approach to meeting the needs of its people," he said.

He added that the forum "has become an essential platform to contribute to Africa's social and economic advancement" and contributes to promoting multilateralism in an "increasingly uncertain global environment."

Ramaphosa concluded his speech by saying that FOCAC's mission extends beyond China and Africa, because "together we are working to build a community of a shared future for mankind."

This is Ramaphosa's first visit to China as South African president. He held talks with President Xi on Sunday.