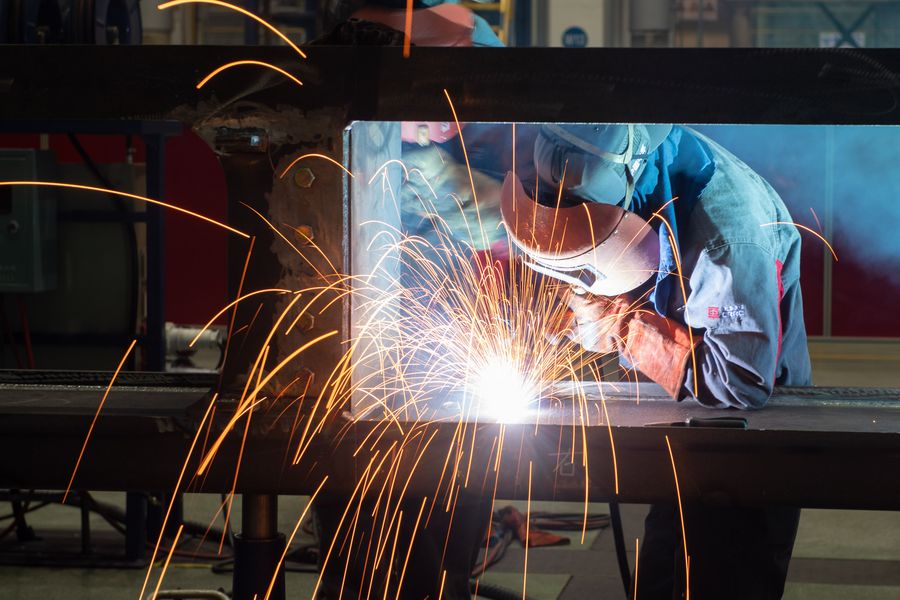 As the coronavirus spreads around the globe, there are mounting worries about a disruption to global supply chains. Against this backdrop, the resumption of production in China, known as the world's factory, bears global significance.

With the reopening of L'Oreal China's headquarters and Research and Innovation Center in Shanghai as well as its plant in Suzhou, Agon expressed confidence that the situation in China will "improve pretty quickly and maybe even more quickly than we thought before."

Meanwhile, as the coronavirus has spread to more countries around the globe, there are mounting worries about a disruption to global supply chains. Against this backdrop, the resumption of production in China, known as the world's factory, bears global significance. 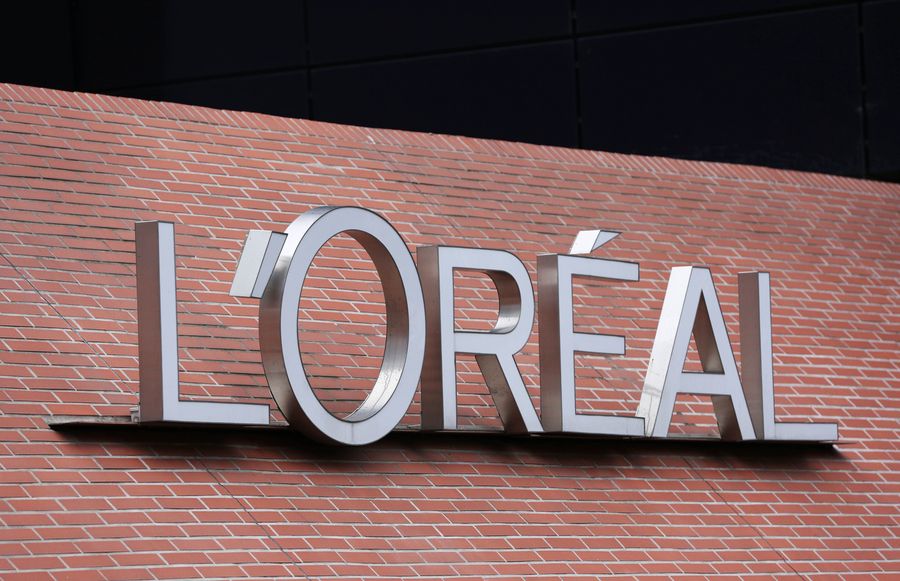 Wearing a mask and white coat, Gao Yu is not a hospital doctor, but a cosmetic formulator in the laboratories of the L'Oreal China Research and Innovation Center in Shanghai.

After returning to Shanghai from her hometown, Gao had been self-isolated for two weeks, during which time she worked from home until returning to the office in early February, like many of her colleagues working for L'Oreal China's factories, distribution center and beauty stores.

Fabrice Megarbane, president and CEO of L'Oreal China, said the safety of the company's employees is its "utmost responsibility and priority." Before the reopening of its facilities in Shanghai, local authorities coordinated with nearby residential communities and buildings.

After its doors reopened, L'Oreal adopted an online and offline strategy. Sales staff now disinfect the hands of every customer who enters their stores, while other protective measures are also in place. 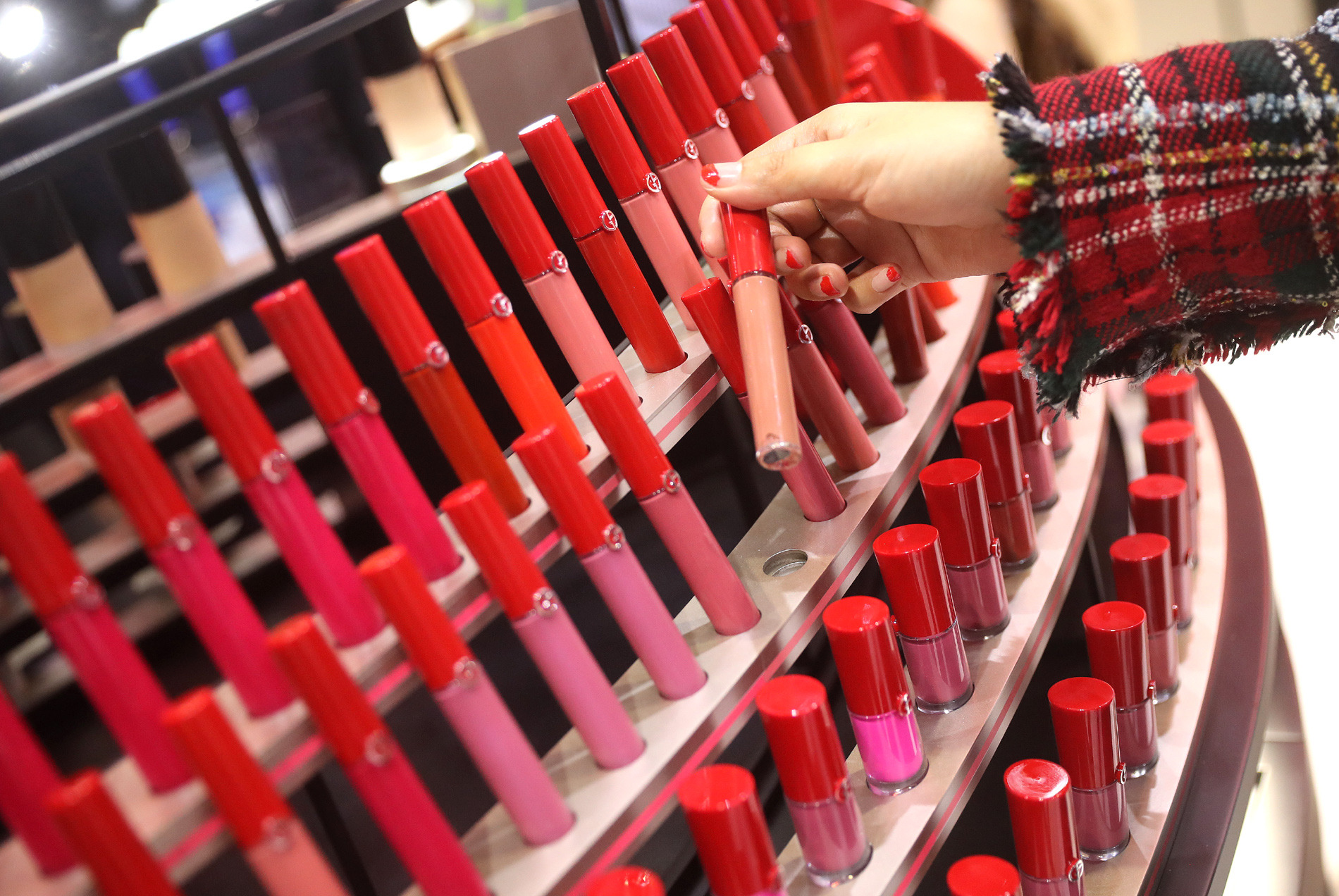 A visitor tries on makeup at the booth of L'Oreal at the first China International Import Expo (CIIE) in Shanghai, east China, Nov. 6, 2018. (Xinhua/Chen Fei)

"When customers watch the live stream and get interested in the product, they can place an order directly online," he said. This new business approach saves customers' a trip to a physical store and eliminates potential virus spread.

Like L'Oreal China, as China's vice industry minister Xin Guobin said on Friday, outside of Hubei Province, the epicenter of the coronavirus outbreak in China, over 95 percent of major industrial enterprises have resumed operation, while around 60 percent of small and medium firms have also gone back to work.

The International Monetary Fund (IMF) was encouraged by the resumption of some production in China, IMF Managing Director Kristalina Georgieva said earlier this month. 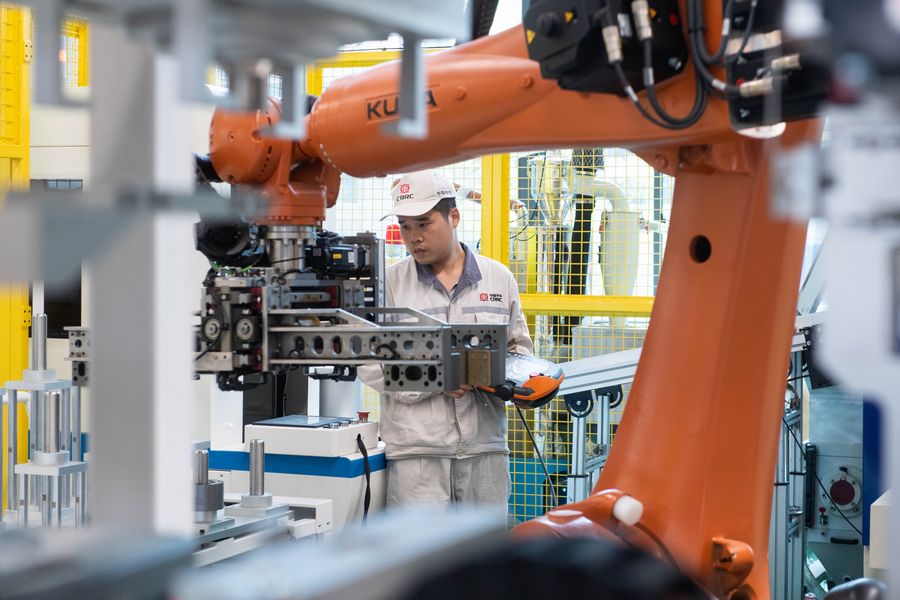 In the Indian city of Mumbai, electrical technician Vinoth Kumar breathed a sigh of relief when he received an email confirming some train parts had been delivered from China.

Line 1 of the Navi Mumbai metro, with its eight-train fleet supplied by CRRC Zhuzhou Locomotive Co., Ltd. (CRRC ZELC), is due to open in October. Kumar, working with the India unit of the Chinese manufacturer, has been debugging the metro system with his Indian and Chinese colleagues. However, after the unexpected COVID-19 outbreak, they had begun to fret about the supply of components.

In Zhuzhou, a central Chinese city known for its expertise in rail transit equipment, Liu Ying, deputy director of the CRRC ZELC's Project Management Center, also faced similar challenges, posed by a shortage of personnel, a lack of transport facilities, and a delay in the supply of materials.

Around China, labor shortages, disrupted transportation, tight cash flows, as well as a lack of raw materials and epidemic control supplies, are the main barriers for the industrial chain to run at full tilt, according to the Ministry of Industry and Information Technology. 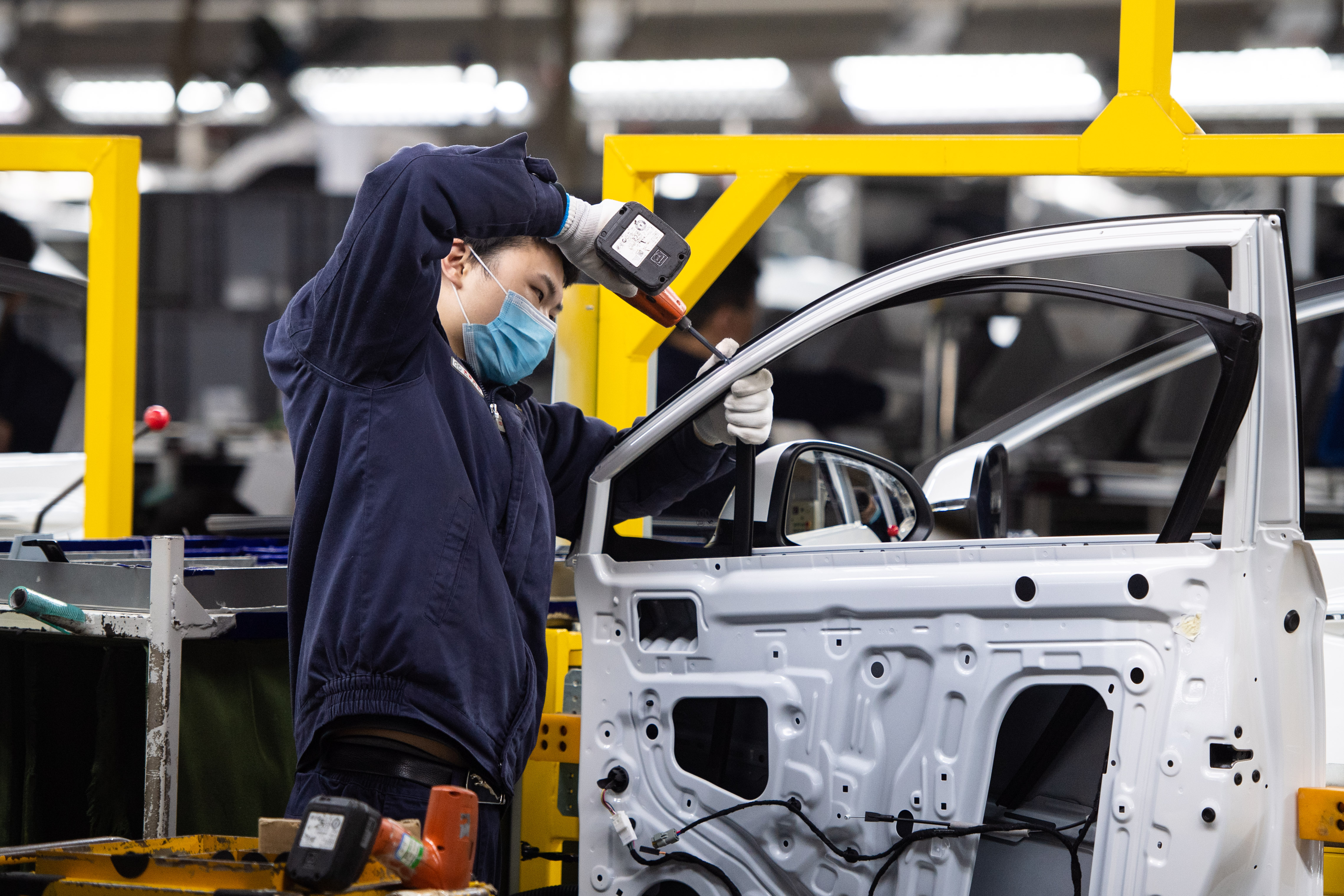 To keep supplies available for overseas projects, the company has formulated a catch-up plan for production amid the outbreak, monitoring daily progress with various departments and suppliers, Liu said, adding that about 95 percent of its employees have now returned to work.

Ding Ci, technical manager of the company's India's unit, said that the Chinese headquarters worked diligently to ensure a continuous supply of parts, "dispelling our Indian partners' worries about the impact of the epidemic."

"All work is proceeding as normal," Ding said.

"I think there is no problem with any rolling stock," Kumar said, adding that "as for this virus, there is no impact (on the project)."

It is widely believed that the COVID-19 pandemic is a stress test for China's resilience in the global supply chain. In the case of the Mumbai metro project, Kumar said, "I am 100 percent confident in the supply of trains from CRRC ZELC in China." 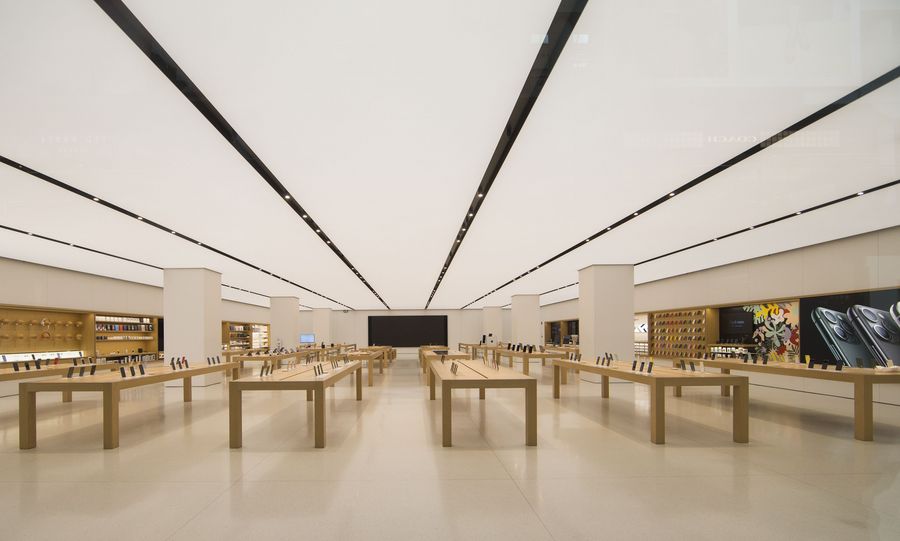 However, "I think in some sectors, companies are so dependent on China. There's no such thing as shifting the supply chain," Nicholas Lardy, senior fellow at the Washington D.C.-based Peterson Institute for International Economics, told Xinhua in a recent interview.

"China is such a huge producer of automobile parts, for example, that go into production in Europe, North America, Japan, (South) Korea. That's not going to be replaced quickly," said the veteran expert on Chinese economy.

Amid the epidemic, Japanese automaker Toyota plans to build a new electric vehicle plant in Tianjin with its Chinese partner FAW Group.

Meanwhile, Apple CEO Tim Cook said recently that since the infection rates in China have dramatically declined, all Apple stores in the country have reopened, while also announcing that the tech giant would close all its stores outside of China until March 27 in response to the spread of the coronavirus.

And, as Agon said, "the advantage now of China is not just a question of cost. It's a question of talent, creativity and innovation." 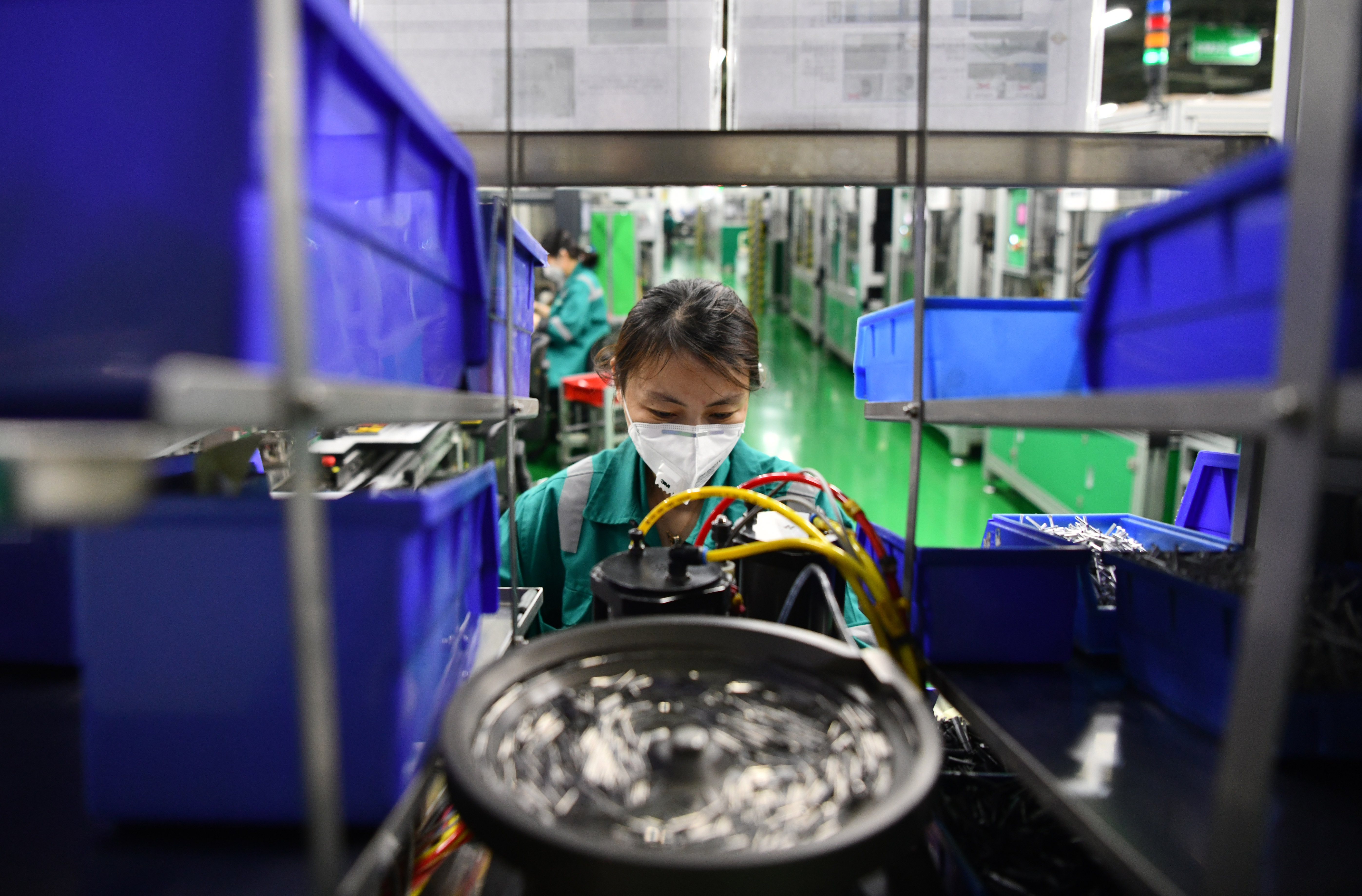 According to a State Council executive meeting chaired by Chinese Premier Li Keqiang on March 10, China will step up efforts to strengthen international cooperation, with measures such as increasing international freight flights, in a bid to maintain the smooth flow of the global supply chain.

Thanks to the concerted efforts, as UN Secretary-General Antonio Guterres said on March 12, with firm determination and strong resilience, China will both overcome the epidemic and restore economic order in a rapid manner.

This not only serves the interests of the Chinese people, but also represents an important contribution to the world, he added. Enditem