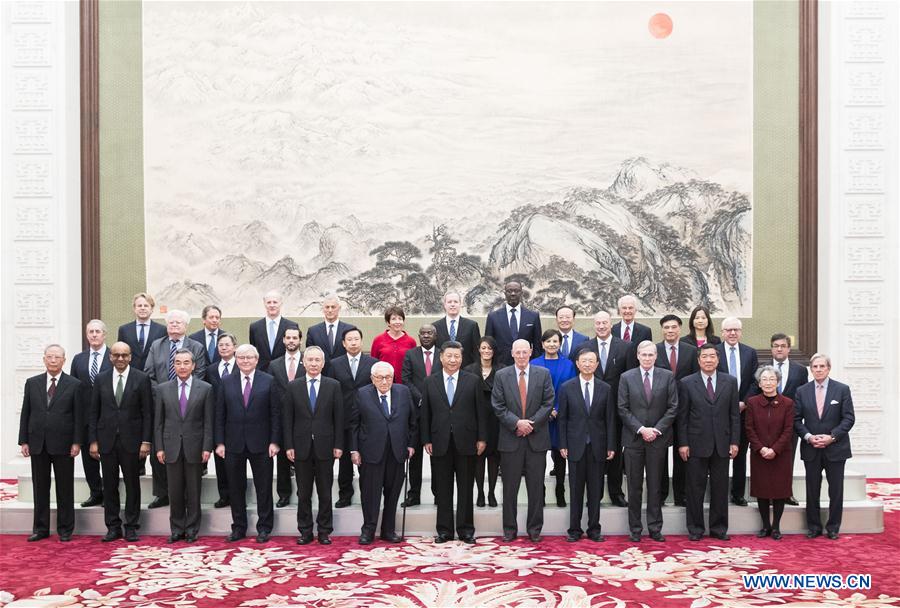 Chinese President Xi Jinping poses for a group photo with foreign delegates attending the 2019 New Economy Forum before meeting with them at the Great Hall of the People in Beijing, capital of China, Nov. 22, 2019. (Xinhua/Huang Jingwen)

Saying he has full confidence in China's prospects for development, Xi noted China does not intend to replace any power, rather, its aim is to "regain the dignity and status it deserves."

The president made the remarks when meeting with foreign delegates attending the 2019 New Economy Forum held in Beijing.

China, with a 5,000-year-old history of civilization, is home to the four great inventions that had contributed tremendously to the progress of human civilization. The country had become a semi-colonial and semi-feudal society since the Opium Wars, but the Chinese people had never yielded and spared no effort in seeking a path to national rejuvenation, Xi stressed.

Earth-shattering changes have taken place since the founding of the People's Republic of China 70 years ago, and the humiliating history of China as a semi-colonial and semi-feudal country will never be repeated, he said.

"The fundamental reason is that we have found a correct path that suits China's national conditions, conforms to the trends of the times and enjoys the support of the people. The path is socialism with Chinese characteristics," Xi said.

With full confidence, the Chinese people will unswervingly follow this path, he added.

Xi noted that innovation is a major theme of the current times, as the world is undergoing changes rarely seen in a century, featuring a new round of technological revolution and rapid industrial transformation.

The common challenges facing humanity call for concerted efforts of all countries. No country can become an independent innovation center or enjoy fruits of innovation alone, Xi said. "Innovation should benefit the world rather than being encaved."

He said China is willing to carry out cooperation in innovation with other countries including the United States, so as to better benefit the people of the two countries and the world.

Despite great achievements, China will continue to adhere to the traditional concept of "harmony in diversity," stick to the path of peaceful development, and strive for mutually beneficial cooperation with other countries, Xi told the foreign delegates.

China will stick to the reform and opening-up through bold innovations and with a manner of "feeling the rocks on the riverbed when crossing the river," he said.

"The more resistance we are confronted with, the more determined we will be to open up," Xi said. "I have full confidence in China's prospects of development."

The 2019 New Economy Forum, which focused on development trends and social impacts of innovation, gathered more than 500 delegates from more than 60 countries around the world.