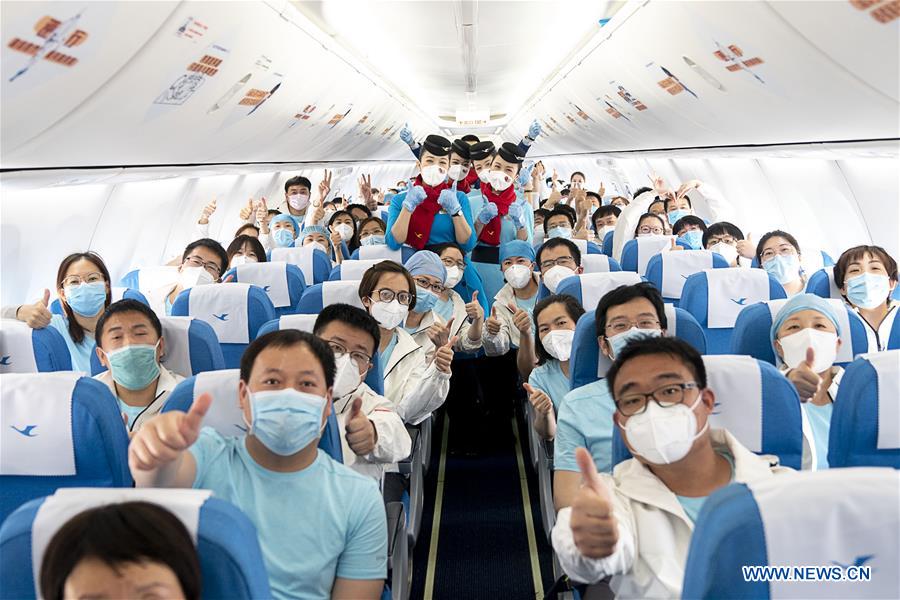 Medics from north China's Tianjin Municipality gesture for a group photo with cabin staff aboard an airplane at the Wuhan Tianhe International Airport in Wuhan, central China's Hubei Province, on March 17, 2020. The first batch of medics have been scheduled to depart Hubei, once the hard-hit province of the novel coronavirus, on Tuesday, as the epidemic situation has been greatly eased. The 3,675 medical staffers belonging to 41 medical teams from across China have assisted 14 temporary hospitals and seven designated hospitals in Wuhan, the provincial capital and epicenter of the outbreak. (Xinhua/Xiong Qi)

WUHAN, March 17 (Xinhua) -- The first batch of medical assistance teams started leaving Hubei Province early on Tuesday as the epidemic outbreak in the hard-hit province has been subdued.

The 3,675 medical staffers belonging to 41 medical teams from across China have assisted 14 temporary hospitals and seven designated hospitals in Wuhan, the provincial capital and epicenter of the outbreak.

Over 42,000 medical workers from across the country were dispatched to aid Hubei in fighting the epidemic since the virus outbreak.

"We arrived in Wuhan on Feb. 4 and worked in two temporary hospitals over the past 40 days. Together with colleagues from Wuhan and Henan Province, we managed 988 beds and treated 1,235 patients," said Ma Fuchun, head of the national emergency medical rescue team from northwest China's Shaanxi Province.

The Shaanxi team consists of 43 experienced doctors and nurses from departments including emergency treatment, gynecology and obstetrics, pediatrics and neurology as well as psychology under the Shaanxi Provincial People's Hospital.

"Our presence here not only reduced the burdens of local medical workers but, more importantly, brought confidence to disease-ridden Wuhan residents. It was also a good opportunity to hone our team," he said.

At 6:30 a.m. Tuesday, medics began to get on the bus. Some of them shed tears behind their masks.

"Wuhan people have acted bravely. I hope life here will return to normal as soon as possible, and the city will become more and more beautiful," said Cui Yaqing, a team member.

At about 7:30 a.m. the medics left Wuhan for Shaanxi. Police officers at the expressway toll-gate saluted while watching their vehicles leave.

In the meantime, 42 medics from the neighboring Hunan Province also set out on the journey home.

The field hospital began receiving patients on Feb. 5 and treated 394 patients in total.

"We have stayed in Wuhan for 43 days. Besides treating patients, we also trained local medics on treating COVID-19 patients with mild symptoms and trained over 200 cleaners and policemen on epidemic prevention," said Xu Junmei, the team leader and vice president of the hospital.

"There were so many unforgettable moments during my 43 days here," said Wen Chuan, a medical staffer. "I will always remember the days the doctors and patients stuck together to keep each other warm and fight the epidemic."

The medical workers will be put under quarantine and vehicles and materials disinfected upon arrival.

Hubei reported only one new confirmed case of the novel coronavirus disease on Monday, bringing the total confirmed COVID-19 cases in the province to 67,799.

As of Monday, Hubei had seen no newly confirmed COVID-19 cases for 12 consecutive days in its 16 cities and prefectures outside Wuhan.

The province also saw 55,987 patients discharged from hospitals after recovery as of Monday.